I intend this first series of post to be a bit of catchup.  There have been a number of changes that have occurred in my life over the course of the past year and I intend to document them.  There will be posts on more recent events as well, but, for now, I intend to record the past.  We’ll start with my trip last year to Iceland.

But first, some backstory:

2011 was an interesting year.  The first half of which was filled with some generally unhappy circumstances that culminated in the breakup of a 5 year relationship (on my birthday, no less, though it had been a long time coming), while the second half was filled with a number of interesting life stories as I approached my newfound singledom in my typical fashion — meaning, I took a slightly sarcastic, cheeky, I-don’t-give-a-damn approach.

What do I mean by that?  Well, I entered singledom determined to generally enjoy myself and set about meeting new people and, in some senses, making up for lost time.  I met a number of interesting people both online (yay, OKC) and offline, some of whom I am convinced were generally psychotic, and came out of it with some interesting stories.  To possibly be covered later: a crazy/poly/bdsm’y Microsoft manager, a heavily tattooed (though she kept them well-hidden) stockbroker that likely has run off and joined a punk band by now (be careful when picking up people at bus stops), someone (my apologies for forgetting your name) met by criticizing their book on a late-night busride and then turning that into a late night happy hour date, and other such fun things as going tail-crazy at a posh Halloween bash and finding myself the center of attention of a group of Brazilian exchange students… as well as some late 30’s and early 40-something cougars.  That last one was a nice confidence booster, as to be expected when you’re told about a dozen different times that you’re exceptionally well-dressed.

I hit early 2012 and decided to do something more selfish.  I don’t mean selfish in the sense that I’m taking away from someone else or not sharing, I mean selfish in the sense that I’m doing something purely for myself.  With that resolution reached, it took me about an hour or two of looking at airline tickets to decide I was going to celebrate my birthday in Iceland and then journey overland from Denmark to Belgium.  Because, honestly, what better way to ring in 28?

Once I had booked my tickets, life seemed to proceed as a whirlwind.  I was training for a half-marathon, busting my ass at work, going to my good friend Melissa’s dinner parties and late night drunken youtube events, and generally getting things in line for my trip.

June was to be a pivotal point in my life, and I realize that especially now as I look back on things.  Not only was I preparing for a long race and a fantastic trip, but I had also started messaging with a very intriguing woman over OkCupid.  She had me more excited about meeting someone new than I had been for a long time.  For one, the was the obvious reason that she was very attractive.  As well, we had a number of interests in common, including: travel, writing, cooking, and enjoying other slightly ‘hipster’ things about our Ballard neighborhood.  Things seemed promising.

My first date with Laura took place at the Gerald and, while it was a nice date, it is one we both remember differently.  Laura, for instance, seems to be surprised that I even continued to be interested with her, as all she can recall is that she spent most of the time bitching/venting about some real estate issues she was experiencing with her home in California.  She also doesn’t recall me being that overtly interested in her.  I, on the other hand, found her seriously charming and could not take my eyes off her cleavage (though I suppose the fact that she doesn’t recall me overtly checking her out is a testament to some stealth-creeping powers I might have.. maybe…?).

It was a nice date, though at the end I forgot to ask for her number… on some occasions, exceptionally gorgeous women leave me tongue-tied.  She was also surprised I did not go for a kiss, but, to be honest, kissing isn’t something I always go for on the first date.  Besides, she was stunningly attractive and she still gives me butterflies, though we’ve been dating for more than a year now.  I made up for all this on the second date, which was to follow about a month later due to overlapping trips we both were taking.

Thus, after a year of ups, downs, twists and turns of crazy, I found myself at a bar at Seatac Airport, ready to board a plane to Iceland.  Oh June, you were a month to remember. 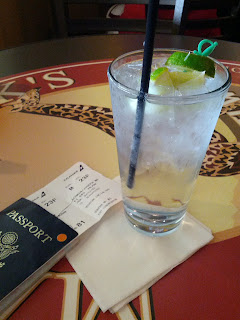