epiccuriSeptember 26, 2013May 23, 2014 Backpacking, Travel No Comments
The Reeperbahn is a unique experience for anyone visiting Hamburg, and for anyone at all interested in nightlife in Europe, I’d recommend at least a visit to the area.  It’s interesting not only for the fun that you can get into on Hamburgs “Sinful Mile”, but also for the insane contrasts you’ll see throughout the area: nice restaurants, next to dirty bars, next to gun/pawn shops, next to discotheques, next to sex clubs, next to McDonalds. My visit to the Reeperbahn was no less eye-opening.  I had arrived at Hamburg perhaps an hour earlier, having taken a morning train from Copenhagen.  I arrived at the Generator hostel, threw my bag on my bed (I’d pre-booked a single room, as it was my birthday and I was damned well getting drunk and having fun), and stormed down into the hostel bar.  Within seconds, I had a G&T in hand and another on the way — it’s my birthday, I’m going to double-fist it — and had sat down next to a girl who was also alone at the bar.
It was only a short while before I realized I had met someone that was both interesting and had a similar travel philosophy: travel light, see the world, and have fun.  Louise was from London, had just finished law school, and was on a trip around the world before beginning a legal career.  After some quick chit-chat, and making plans to visit Hamburg’s concentration camp tomorrow (she had bemoaned the fact that there wasn’t anyone in the Hostel that was interested in going with her to see the camp), we set out to experience some of the night life in the St. Pauli district and on the Reeperbahn.
Thankfully, it was a short subway ride away from the Hostel (drinking and short travel distances are a fantastic pair), and soon we were stalking the crowded streets looking for trouble.  One of the first things that caught my gleeful eye was a cheap sex club that shared it’s location with a McDonald’s.  I’d always thought the world could use such a serendipitous pairing: cheap food and cheap women.  I insisted on getting a picture or two, and managed to snap one off before the bouncer in front of the club chased us away. 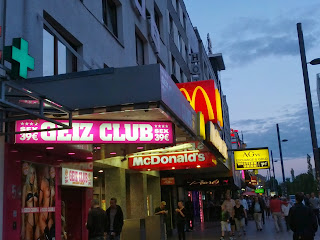 Sex and a meal for ~45 Euro combined?  What a value!
Our wanderings took us further down the street, as we hopped in and out of restaurants and bars, grabbing drinks at each stop.  One of the interesting things about the Reeperbahn was that there were some nice-looking restaurants along the way; it wasn’t just sex club after bar after sex club, there were actually people who were dining outside along the avenue at restaurants that looks fairly high class.  Now, the great thing about the Reeperbahn is that, after passing those stodgy restaurants, you could hop into a dirty disco, hop onto an outdoor dancing floor, or duck into some underground bar.
Once we were good and drunk, we got into a bit of the seemier side of the district and we found shops that definitely catered to the drunk and rowdy: weapon shops.  Because swords and guns are fantastic to pair with booze! 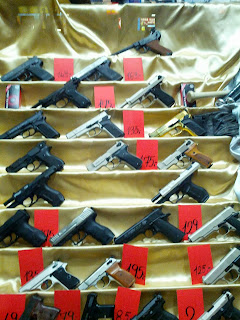 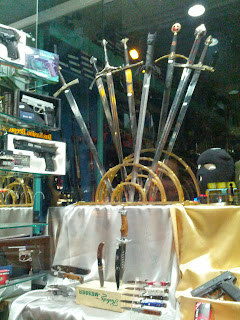 Everything one could need for some serious mayhem: guns, swords, and ski masks! (No, these are not real guns or swords).

After some further wandering past interesting shops, and settling on the next days travel plans – it was at this point we decided that we’d voyage out to the countryside to the Neuengamme concentration camp – and having commenced with some Nazi jokes – we figured we had better wind down the night with just a few more bar and club stops as it’d be an early day the next day to get to Neuengamme. 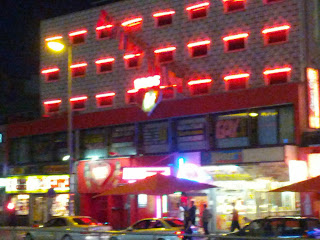 The trip back from the Reeperbahn was nearly as interesting as the Reeperbahn itself.  after settling in to our seats on the subway, we started chatting up some of our German neighbors.  After a bit of introductions, it came out that I was from Seattle.  Apparently, grunge is still pretty popular in Hamburg (or at least it was to these guys) and Louise and I spent most of the ride listening to how awesome Kurt Cobain was and hearing (and participating in) some drunken renditions of a few Nirvana songs.  Thankfully, the ride back to our stop was short and soon we were back at our hostel for a final drink and to cash in for the night. 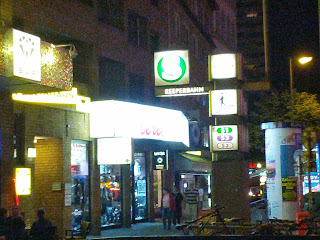 For those who are considering checking out the Reeperbahn, here are some tips and tricks you may find useful: