One of the first things that stands out about Iceland is the quality of its food.  The seafood, lamb, and even staples like pizza, are superior.  But, then, it figures that when everything is 30-50% more expensive than anywhere else, it would need to be.

One of the most well-known dishes from Iceland is hakarl.  To the uninitiated, hakarl is the meat of the Greenland shark.  The shark meat is normally toxic, however, centuries ago the Icelanders discovered that if you buried the carcass of the shark in the sand for a very long time, allowed it to go through several cycles of freezing and thawing, along with decomposing, and then you cut the meat into strips and let it hang dry for a long time, you got something that was almost an approximation of food.  Once you scraped the crust off the dried meat.
Now, as a fan of many of the food/travel shows like No Reservations and Bizarre Foods, hakarl was something that I knew I wanted to try and it was one of the first things I sought out.  It didn’t take long to find a place that served it (with a view, no less!).  And so, it was at the Cafe Loki, in the same square as the famous Hallgrimskirkja, that I settled in to attempt a dish that had caused Gordon Ramsay to vomit and Anthonny Bourdain described as “the single worst, most disgusting and terrible tasting thing” he had ever eaten.
I was excited.
Now, I hadn’t just ordered the hakarl (because that would be crazy).  Instead, I had coming to me a plate of dried cod with butter, smoked trout, lamb, and a mashed fish.  And, in the center, were the tiny innocuous cubes that had brought down other veteran eaters. 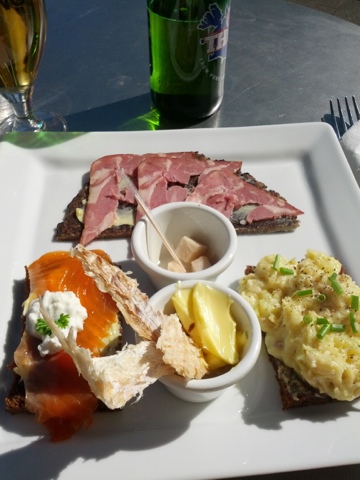 I had decided to save the hakarl for last, so that I could at the least enjoy everything else on the plate without a (potentially terrible) taste in my mouth.  The dried cod and butter was delicious, while the mashed fish, smoked trout, and the lamb were some of the best I’ve ever had in my life.  The lamb, in particular, was beyond incredible and, apparently, Icelandic lamb is incredibly well regarded as they are said to spend their entire lives wandering the pristine Icelandic landscape while dining on grasses and herbs.
At any rate, I finished everything around the hakarl, while those little morsels of meat sat there taunting me with there ammmoniated smell and their gelatinous look.  They sat there, smug and proud, daring me to have a go at them.  And so, with nothing else on my plate and a second beer fresh in hand, I picked up my toothpick and faced down my adversary. 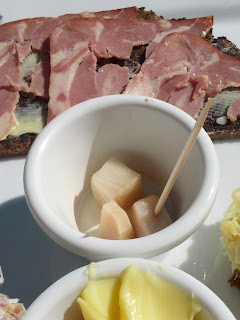 A close-up of my adversary.
It wasn’t as bad as rumor would have you believe.  Was it at all appetizing?  Not really.  Texture-wise, it could best be described as an unnaturally firm meat-jello.  With a fairly strong ammonia smell, and both a faint ammonia and fishy taste, it was odd.  I did finish it all, with no hesitation beyond taking the first bite, and I would recommend giving it a shot the next time you have the opportunity.  It’s quite popular over there, and you can find it in grocery stores (in tiny vaccuum sealed freezer bags) and even in thee airport gift shop.

3 thoughts on “Iceland – Encounters with shark-jello”