epiccuriOctober 13, 2013April 11, 2014 Backpacking, Travel 3 Comments
The Delirium Cafe is a renowned site amongst beer afficianados, famous not only for it’s location – in the Beer Mecca known as Belgium – but also for it’s distinguished taplist and, even more so, for it’s incredible bottle list, with more than 2,000 beers from throughout the world.  I’ve been to Brussels six or seven times, and I’ve been to many of the different beer shops and taphouses throughout the city, and the Delirium Cafe is a perfect example of why I consider Brussels to be one of my favorite travel destinations.
For those who aren’t that familiar with the beer scene, Belgium is the home to a huge variety of styles, many of which are very, very tasty;  there are a number of monastic beers (brewed by Trappist monks) such as: dubbels and tripels; one of the rarest and most expensive beers (Westvleteren 12); wheat beers (wits, such as the famous Hoegaarden); farmhouse ales like Saisons (such as Saison DuPont); and my personal favorite: sour beers such as Lambics, Guezes, Oud Bruins, and Flemish Reds.  To have such a delicious variety of beers originating in such a small country makes me incredibly happy as a beer-lover, because it means each time I visit Belgium, I’m in a nexus of incredible beer. 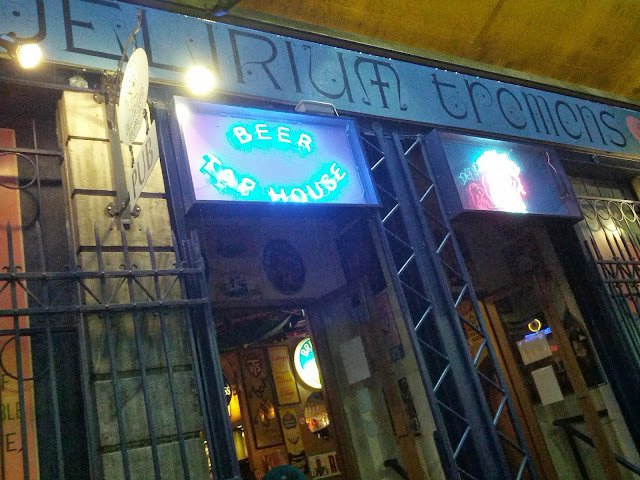 The Delirium is located in an alleyway called Impasse de la Fidélité (in French) or Getrouwheidsgang (in Flemish), and is almost directly across from the Jeanneke Pis.  For those of you who have never heard of Jeanneke, she’s the sister to the Manneken Pis.  The Delirium is also only a short walk from the Grand Place, so it isn’t very hard to find.  The building itself is divided into several parts and is part of the ‘Delirium Village’.  In the same building you can find the Delirium Taphouse, the Delirium Hoppy Loft, and the Delirium Cafe.  The Delirium Cafe is located in the basement of the building and is home to the most extensive beer list in Brussels, and the world.  The Delirium Taphouse, on the middle/ground floor, has an extensive tap collection (duh), while the Hoppy Loft on the upper floor focuses on hoppier beers and has an extensive collection of US Microbrews.  As to be expected with a place that’s famous for beer in a city that’s on it’s own famous for beer, the Delirium gets pretty packed.  If you come here and don’t want to deal with crowds, come during the afternoon or the early evening. 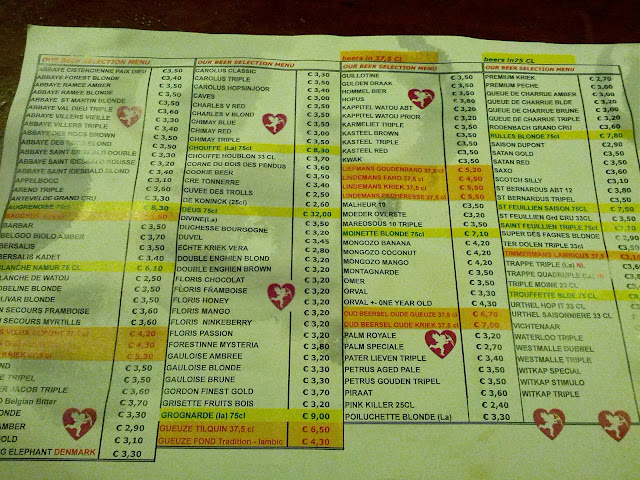 Look at that list!  Seeing Guezes, Lambics, and other Flemish sours makes me happy!

I started my visit to the Delirium by checking out their Taphouse.  The list itself is extensive, and contains many different high quality beers on tap.  As I had recently arrived from Hamburg and some debauchery there, and was feeling a cold coming on, I thought it would be appropriate to begin my night of drinking by ‘rallying’ with a Satan.  It isn’t the best beer ever, but still a great quality drink and I felt the name was appropriate inspiration as a rally beer. 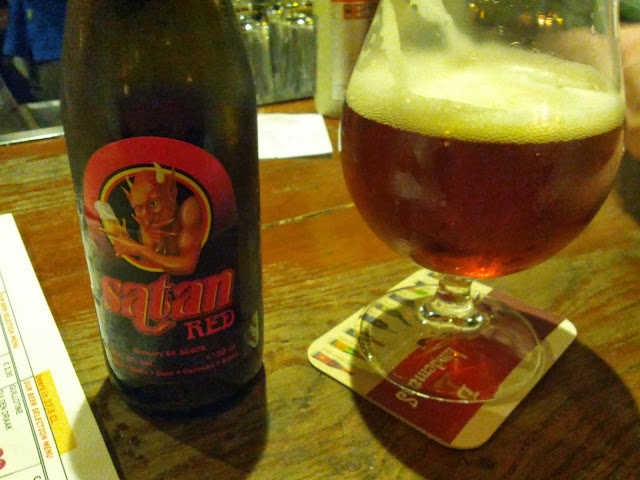 Hail Satan!  Give me the strength to rally!
Now, I wasn’t here in the taphouse long, as I wanted to see the true star of the show: the Delirium Cafe and its fantastic bottle list, which was located in the basement.  After downing Satan, along with a few sour (a lambic, gueze, and a red) and a tripel, it was time to venture downstairs into the holiest of holies: the Delirium Cafe. 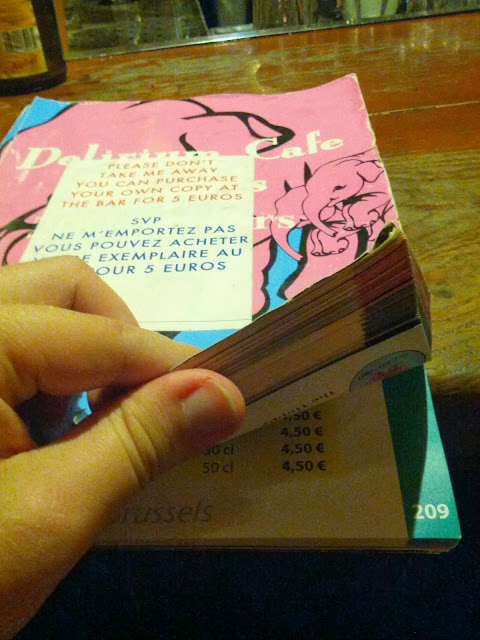 To call it a ‘bottle list’ is a misnomer – it’s more like an encyclopedia.
Now, there are places that have extensive beer list, like Brouwer’s Cafe here in Seattle, where you might get a page or two on a menu… and then there is the Delirium Cafe.  Their ‘beer list’ is several hundred pages long, it’s organized by country, and just looking at it is enough to make a beer-lover like myself giddy.  Really, the only way I can describe the menu is: it’s glorious.  If you visit Brussels, I recommend checking it out.  Honestly, to really get a decent sampling of what they have to offer, you’ll want to visit several times and spend several long sessions here.  I know, I know, it sounds incredibly taxing having to plan to hit up the same bar several nights in a row, but it’s worth it.  And, if you truly love the place (and beer) like I do, you can even buy a copy of the beer list.  I did, and I still look at it longingly from time to time… don’t judge me.

Overall, the Delirium Cafe is an excellent place to get a sampling of some of the best that the Belgium and the World beer scene has to offer.  It’s not the only place in town, and there are some fantastic and more specialized joints that I’ll cover in a later post, but for anyone looking to expand their beer exposure, they should check out the Delirium Cafe.

3 thoughts on “The Delirium Cafe – Brussels”