Uzbekistan is not the place most people would think of when asked to name one of their top travel destinations.  It is a unique backpacking destination, yes, but if you asked anyone the appeal of the place, most people would be left scratching their heads.  Now, places like Thailand, Japan, India, and Brazil all have their obvious appeal and I’ll readily admit that I plan to visit and re-visit all of these countries in the near future. However, there is something that appeals to me on a deeper level in visiting some far-flung, semi-inhospitable country that oozes history.  Not to mention you have the absurd attraction that this is essentially a post-communist dictatorship carrying on the region’s traditions for absolutist rulers, and the chance to see an insane level of environmental misuse in action with the destruction of the Aral Sea.

Sound appealing?  No, I thought not.  But let me tell you why you should care: in Uzbekistan you can see a window into an important part of human history that not many people even know about.  This is a place where empires rose, where tyrants like Tamerlane called home, where east and west met along the old Silk Road, where a dying language was saved, and where Caliphates warred with Chinese Dynasties.  You’ll see some truly impressive examples of Islamic Architecture, and the cities of Bukhara, Samarkand, and Khiva are some of the brightest jewels of Central Asia.

Now, what do you need to know to get here?  First, you’re going to have a bit of a hassle with the Visa process unless you happen to have a passport from one of the CIS states.  There will be a fairly steep Visa fee, depending on the amount of time you wish to spend in the country.  If you’re a US Citizen, you’re going to pay a higher fee; if you want your Visa processed in 10 business days, it’s $160; if you want your Visa processed in 4 business days, it’s $240.  In addition, most people will need a Letter of Invitation as part of the visa process.  For that, you’ll want to talk to a travel agent in your local area, or you can use a company like Stantours.  LOI’s are not uncommon for the region, so if you plan to go from Uzbekistan to any other Central Asian country, I’d recommend working with an agent to sort out any potential Visa issues well ahead of time.

So, you’ve landed in the capital Tashkent and now you’re wondering to yourself what exactly there is to see in this arid country of valleys, deserts, and mountains.

Khiva
Looking over the walls of Khiva
Located just a scant five kilometers from the border with Tajikistan, the entire inner city (the Itchan Kala) is listed on the UNESCO World Heritage List and exists as a living reminder of the city’s past glory as a trade center on the Silk Road and as the heart of the Khorezm empire.  The most common way to get to Khiva is by traveling to the Urgench and then taking either a taxi or bus to Khiva.  The cheapest way to get to Khiva by taxi is by heading to the Urgench bazaar and looking for the official Khiva taxi stand.  It’ll set you back about 1,000, however compared to the rates for the unofficial taxis in Urgench (which set you back around 8,000), it’s a pretty good deal.  Also at the Urgench bazaar you can find the trolleybus, which will take you on a meandering route to Khiva for the sum of around 800. 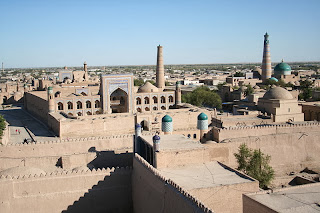 A view of central Khiva and the Kukhna Ark
Khiva was founded around 2,500 by one of Noah’s sons, Shem, at least according to local legend.  Khiva became known along the Silk Road not only as a trading spot for the usual goods, but for slaves as well, and it developed quite a brutal reputation for it.  Some important sights to see include the Kukhna Ark (the Fortress-Palace that housed the rulers of Khiva from the 12th to the 17th centuries), the city walls and city gates (built from brick, with the oldest parts dating to the 5th and 6th centuries), and the Pahlavan Mahmud Mausoleum (resting place of the folk hero Pahlavan Mahmud, along with dynastic figures in Khiva’s history).
Samarkand
At more than 2,500 years of age, Samarkand has long been a jewel within Central Asia and is a must-see for all travelers visiting the region.  The city center is listed on the UNESCO World Heritage List and the city shows some impressive examples of Central Asian Islamic Architecture and relics of Persian, Mongol, Timurid, and other dynasties.
Samarkand, being a tourist attraction within Uzbekistan, is pretty easily accessible.  There is a local airport, and regular train and bus service form several points throughout the country. 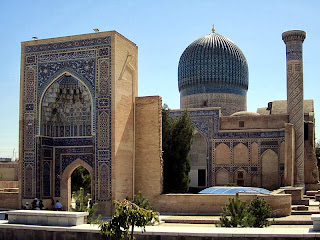 Meaning “Tomb of the King” in Persian, the Gur-e Amir is a mausoleum complex containing the remains of the conqueror Tamerlane, along with his sons Shah Rukh and Miran Shah, his grandsons Ulugh Beg and Muhammad Sultan, and his teacher Sayyid Baraka.  It was begun towards the end of the 14th century, and it served as the architectural inspiration and precursor for other great Turkic-Persian tombs such as the Tomb of Humayun and the Taj Mahal of India’s Mughal dynasty.  It is big, it is majestic, and every bit what one would expect of the tomb housing the remains of one of history’s greatest warlords. 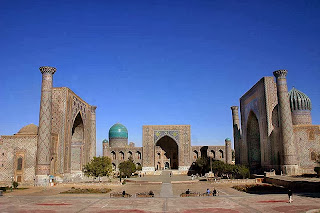 Home to three majestic madrassa – the Ulugh Beg Madrassa (built in the 15th century), the Sher Dor Madrassa (built in the 17th century), and the Tilya Kor Madrassa (also built in the 17th century) – the Registan is the heart of Samarkand.  Under the Timurid dynasty, which constructed the Ulugh Beg Madrassa, the area was one of the centers of secular science in the Islamic world.  The Registan continued to expand and flourish under the Shaybanid and the Janid dynasties that succeeded the Timurids. 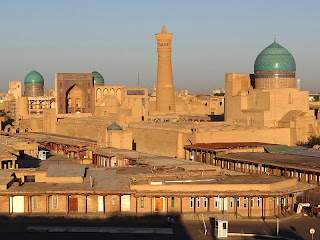 Another great center of the Silk Road, Bukhara was a center of art and one of the centers of Persian literature at a time when that great language was just being resuscitated by writers and poets after practically going extinct due to the conquest of the Persian Empire by the Arabs.  Here, they turned what was once a cuneiform language used largely by the Sassanian Persian elite, into a language written in the Arabic script and used to preserve the common Persian heritage (in the Shahnamah) and in poetry and literature.  At more than 2,500 years of age, Bukhara has during it’s time been part of Persian, Greek, Mongol, Arab, and Turkic empires.  It is a UNESCO World Heritage site and has, throughout its history, been a refuge to artists, scholars, and persecuted religions.  Great poets and scholars such as Avicenna and Rudaki, among others, at one point called Bukhara home.

The Kalan Minaret and the Mir-I Arab Madrassa

The Minaret and Madrassa are part of the Po-i Kalan complex, which also contains the Masjid-i Kalan.  While the Masjid (Persian for mosque) and the Madrassa are both impressive structures in their own right, the most interesting piece of the complex is the minaret.  Built in the 1100’s, the minaret eventually took on the nickname “The tower of Death” as it became the method of execution for those sentenced to death.  The convicted would be brought to the top of the 150 foot tall tower and then shoved from the top.  This practice took place for centuries, only stopping in the early 1900’s. 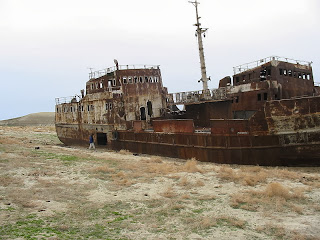 The remains of a ship, resting on the bed of the Aral Sea
The Aral Sea is the site of one of the worst man-made environmental disasters in the history of the planet.  At one point, the Aral Sea was one of the four largest lakes on earth, and contained more than 1,500 islands between it’s shores (the name “Aral Sea” essentially translates from Turkic as “Sea of Islands”).  Since the 1960’s, when the Soviet Union began diverting the rivers that fed the Aral Sea, it has been consistently shrinking, to the point that the current body of water is less than 10% it’s original size.  This is a place to go where you can walk amongst the hulks and ruins of ships, upon the bed of what was once a massive lake that is still dotted with seashells, and to see the sheer power of man’s impact on the environment. 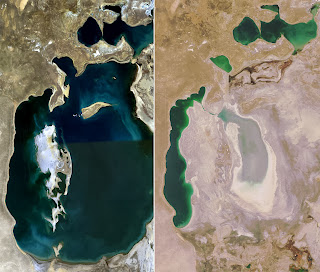 And there you have it, some highlights of a country that to most people is not even an afterthought in their travel plans.  It just goes to show some of the incredible history you can find on your travels, if only you have the drive to look for it.  If you’re interested in other suggestions, check out my list on my Top Ten Unique Backpacking Destinations.  What are some destinations you’ve found that have been surprising in what they have to offer?  Are there any hidden gems out there that you’d like to suggest to others?